My Patience is Bad

Recovery was going well.  I was off the crutches after a couple days and was able to walk fine.  A little physical therapy and I was getting good.  Range of motion was almost all back and swelling was going down.  Then it went downhill, with constant fluid coming out of a hole and followed up by big-time swelling a few days later.  Lots of ice and trying to stay off my feet as much as possible (which isn't that much).  I'm back to full range of motion today and the swelling is almost gone.  Now the hard part is just trying to take it easy and fully recover.

In the meantime, I've got lots of other things done.  They said moving 10 yards of rocks and materials wasn't good for my knee, but I was able to finish xersoscaping the rest of my backyard.  Here is 1/2 of the backyard. 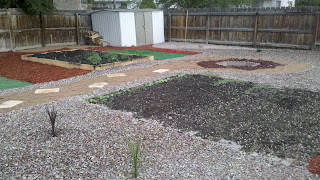 My dad was also in town, so he got a bit of riding in on my bike.  Glad someone could use it.  Took him up into the high country a few times to check it out.  Grand Mesa, Pinyon Mesa for riding, while I fly fished.  Then we cruised down to Ouray, hit the Orvis hot springs, cruised town, checked out the waterfalls and had a drink at the brewery. 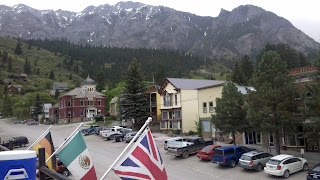 Posted by Brent at 9:35 AM No comments: Links to this post